"Education is not the learning of facts, but the training of minds to think." -Albert Einstein

I must confess that I like my job at the European Parliament, although there are days when I would like to exchange my parliamentary bench with a school bench. Who doesn't like remembering those carefree school years?  However, we should be careful what we wish for because sometimes it might come true. That's how I ended up back at secondary school - even if from a slightly different position.

I was recently appointed as Chair of MEP Ambassadors for the "JA Back to School" campaign, which reconnects MPs and MEPs with educational institutions in their country. I officially launched the campaign on Monday, 8th February, at a grammar school in Ostrava Hrabůvka which, according to JA Czech’s CEO Josef Müller, has been successful in integrating entrepreneurship education into its teaching for more than twenty years. Students were mainly interested in my personal journey, from my studies in Italy to by starting my own business up, all the way to the finish line at the European Parliament.

The campaign aims to promote entrepreneurship, skills and the entrepreneurial spirit amongst young people.  Developing an entrepreneurial mind-set does not necessarily mean that each student must start his own business. Rather, it is about an overall approach to professional life, attitude at work, and the courage to try new things and take advantage of opportunities. Entrepreneurship education should be accessible to all young people throughout their studies. By connecting the academic world with the world of politics and business, the Back to School campaign seeks to foster and develop an entrepreneurial attitude amongst young people during the course of their studies. Ultimately, it aims to support European integration.

The campaign is conducted under the auspices of JA (Junior Achievement), the largest and oldest educational non-profit organization in the world whose mission is to provide young people with practical economic education and develop their knowledge. JA works to inspire and encourage them to take an active approach to their life and ensure they are well prepared to enter the labour market. 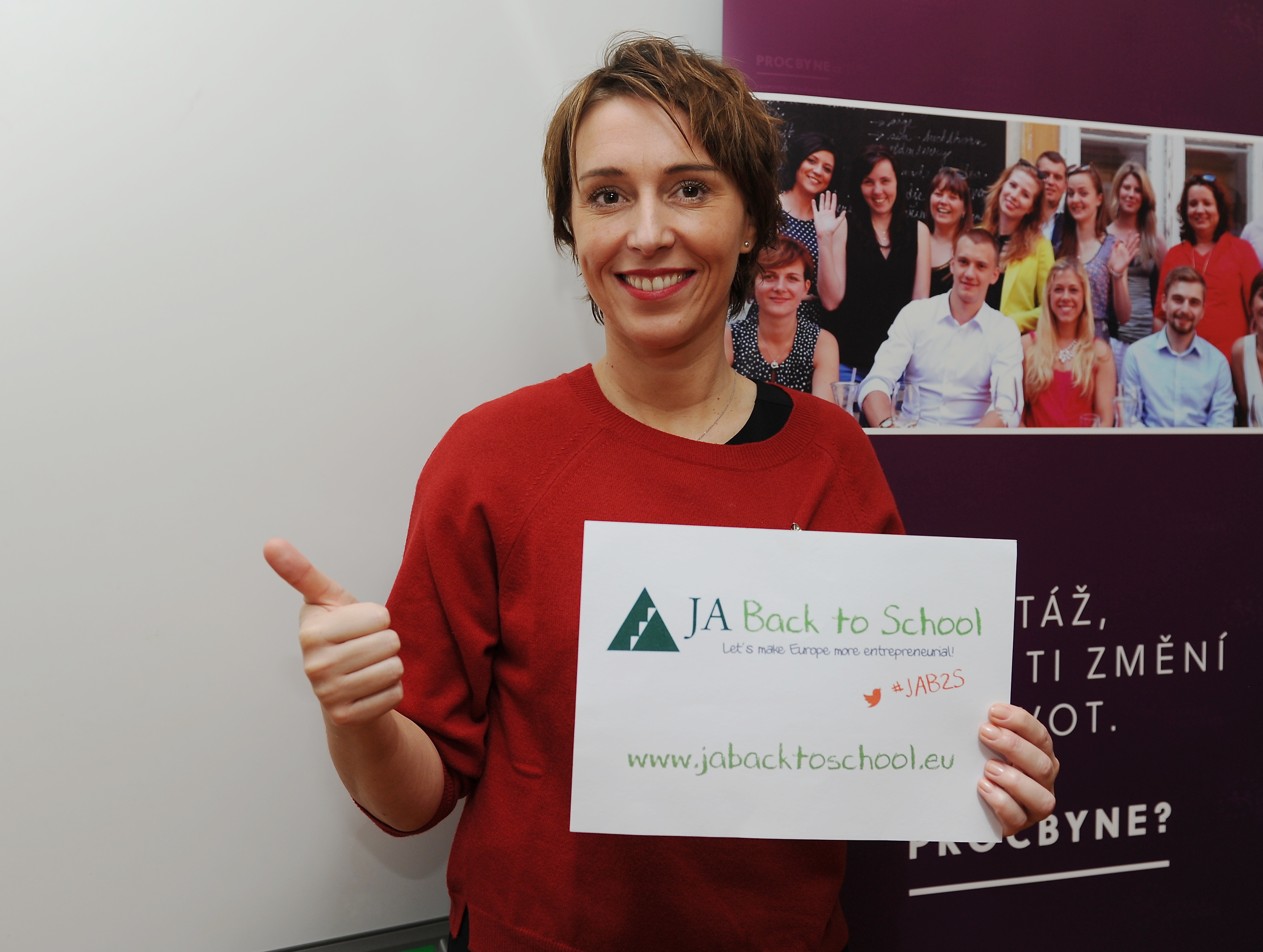 Participation in this campaign, however, is not my first step in cooperation with JA. Entrepreneurship education has long been close to my heart. Perhaps in part because JA Czech was founded in 1992 by the son of my favourite Zlín native, Mr. Tomas Bata Jr. In fact, my own initiative report on creating a competitive EU labour market for the 21st century, which was adopted last autumn, is based on JA’s same values. Likewise, my project of motivational traineeships called ‘WhyNot?’ was created in the same nature. I try to encourage young people to be brave enough to fight for their dreams and to take a proactive approach to building their future careers.

When JA approached me several months ago to become one of the MEP ambassadors within the European Network for Entrepreneurship Education (EE-HUB), whose creation was initiated jointly by JA and the European Commission, I did not hesitate for a moment. I have always been convinced that science, business and politics must work closely together, meet up on a regular basis and share their views and experience so that we could create a well-rounded and high-quality educational framework. The EE-HUB network, which involves the campaign JA Back to School, represents one of those great opportunities. 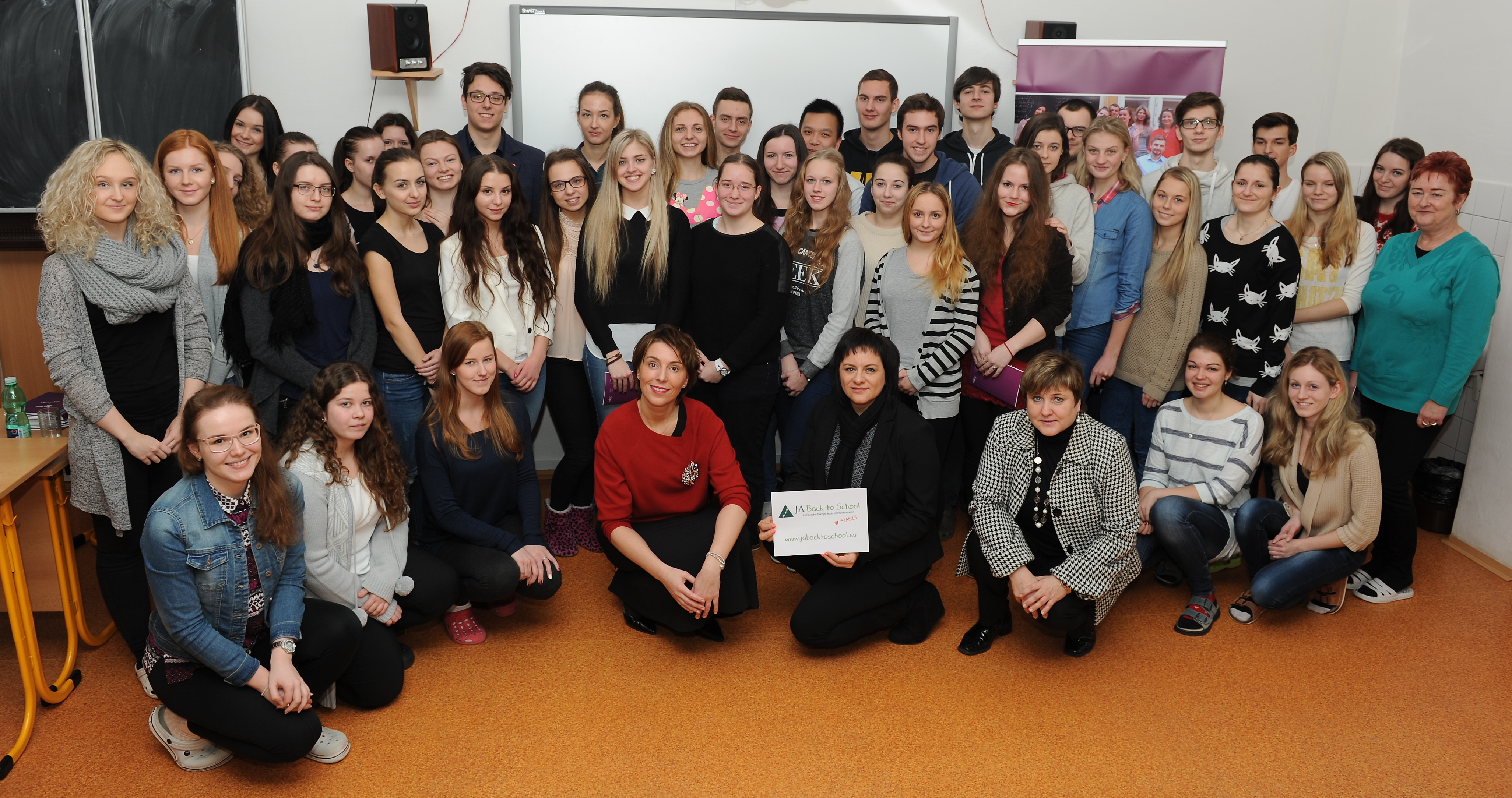 Today's school visit in Ostrava Hrabůvka is the first ever of such visit under this campaign and the fact that I chose this school is not a coincidence. A local student and participant of the JA project ‘Leaders-for-a-Day’, Nikola Sýkorová had shadowed me last October during one working day at the European Parliament. Nikola, along with other classmates were awarded for the successful launch of their student company Czech-it, which provides enlightenment in technical education among Czech students. I greatly appreciate the enthusiasm and motivation of young people, especially that demonstrated by Nikola! I wish there were more similar activities in all Czech schools!

My goal is to gradually incorporate entrepreneurship education into the national curricula at all levels of the education system. Europe has a huge potential in human creativity and talent that has not yet been discovered or harnessed. We must, therefore, motivate young people and foster their entrepreneurial spirit and creativity, no matter what career path they choose. Creativity, together with an innovative and proactive approach and the ability to take risks, are qualities that everybody, without exception, can use in daily life. Let’s try to show them the right way.

Martina Dlabajová (born 26th July 1976) is a Czech businesswoman and international consultant, former president of the Regional Chamber of Commerce of the Zlin Region (2012 – 2014). Since 2014 she is a Member of the European Parliament. For many years she was the coordinator of the Office of the Zlin Region in Brussels. At the end of 2012, was elected the president of theRegional Chamber of Commerce of the Zlín Region. She also founded and managed several companies in the Czech Republic, Slovak Republic and Italy.